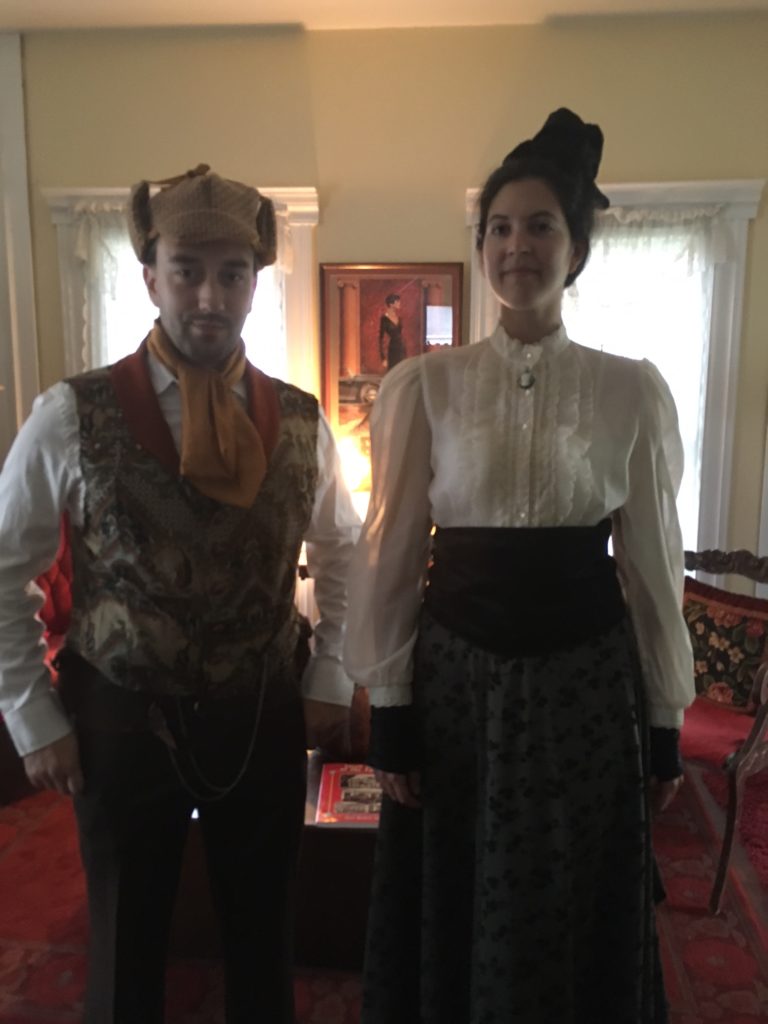 So Irene. Irene was a bit of a hang-er on, but I like couples’ costumes. So with steampunk Sherlock Holmes on the docket, what else was I supposed to do?

(I did actually end up thinking of a fun little narrative that blended real life and our personas: Irene’s supposedly given up her wicked ways and turned tailor to Sherlock. Of course it’s all just a ploy to get close enough to slip him something nefarious. *turn to look at him* “You didn’t hear that dear, just go on and investigate that odd thing over there.” Etc.)

Most of the outfit was already made. The skirt was actually the second version of that set I had made, since I sewed (except for the hem) a shiny brown version for my friend’s wedding outfit (which she combined with a lacy white shirt and beige corset to look amazing). Here’s the best part: it’s a mash up: bolero skirt (without loopy trim) from McCall’s 7071 and train from McCall’s 6097. My skirt was a dull green covered in black velvety flowers with a dark green velvet waistband (from the stash!), and my train was a darker shinier green (which I may have purchased). The only thing I actually had to do for the ren fair was add buttons to attach the train to the skirt. So…repeat semi-freehand note from Sherlock’s vest.

The top I’ve had for a long time; it was a hand-me-down from my mom. I searched antique shops for a cheap cameo for a long time, and the result has been hanging from the top button hole for quite a while as well.

I could’ve just used the good black leather boots I’ve owned since high school, but I ran into a pair at the thrift store with silver buttons on the side just before the ren fair and couldn’t resist. This. Was. A. Giant. Mistake. They were way too big and I had enormous blisters starting on the balls of my feet before we even got into the ren fair because we parked at the back of beyond. I thought about buying shoes from a vendor, but they were ridiculously expensive. So I begged a wad of napkins off a pickle vendor and stuffed them into my shoes. It helped enough that we could move around a little, and kept the blisters from getting worse. But I’ll be cleaning the mud off those shoes and sending them back to the thrift store. Lesson: always, always walk around in your shoes. *sigh*

How how else did I dress it up? I bought half a yard of cheap black velour and built a steampunk hat and fingerless gloves (McCall’s 6975 again) and a cummerbund or waist corset (patternless!). The hat turned out to be good practice for Sherlock, and the gloves…I had to think hard about those gloves – which side was up, which hand was which. I ended up pulling some shiny black fabric from my stash to line the thumb and wrist, and to make a flat version of what was supposed to be a crinkled connector to pin the palm side shut. And I did all three in an afternoon! The amazing thing about the hat is once I pinned it on top of my head, I completely forgot it was there.

We also borrowed a parasol from the theatre props in our basement, but didn’t end up using it. I think eventually I might like to build her a matching one with a more period-appropriate profile. And I’ll admit I saw a poison ring at the same antique shop where we picked up Sherlock’s stick pin that was quite tempting.

I keep wanting to transition from costumes to historical clothing, though, and having the costume contest judge say it was only “kind of” 1890s really drove that home. I read on a historical clothing blog that the important thing is starting with the right undergarments to build the silhouette. I can improve this costume while setting the stage for future outfits simultaneously. I’ve got a pattern for chemise, drawers, and corset already, and clearly it also needs couple of petticoats and possibly a bustle. So we’ll see where that gets it.