I started by sewing Jeff’s under tunic, the soft beige cotton (sacrificing the probable underskirt for the Regency dress). I mentally compared it to the vest I’d recently fitted, and knew I had a problem. Jeff couldn’t get it on. I added a triangular gusset under each arm. It was still too tight, so I added another, this time with the point up. Finally it was close enough.

I left the sides of the heavy red over tunic open through the torso. There just wasn’t enough fabric left to add back circumference. I hacked off the sleeves, put in the seams on the skirt, and called it a day. The rough, unhemmed look seemed like the best choice for this simple outfit – I guess we’ll have to hope that we won’t use them enough to need to wash them!

I moved on to the soft brown linen I wanted to be my own under tunic. As I started on the side seams, I realized I’d cut and/or sewn it at the wrong placement and rotation – I’d used the torso for the sleeves, and ended up needing center front and center back seams in addition to side seams. I started piecing it together, and added what I’d intended to be a skirt panel to the center front to get enough girth. The next panel became triangular gores on either side to widen out the hips. I added skirt panels horizontally instead of vertically, extending the length more slowly in order to get all the way around. The front was still shorter than the back by the time I was through, but it ended on the selvage so I could once again skip the hem. It was much shorter than I wanted. 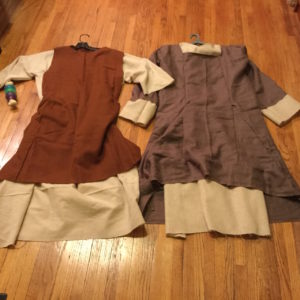 Then I went back to the rough beige almost burlap that was left. With the sleeves and side seams stitched, it was a tight fit. And a bit scratchy. I cut off the sleeves and added them to the ends of the brown tunic as a decoy longer sleeve. That eased up the fit a bit, too, I expect. Rather than fine tune any further, I got out the minuscule bit of fake leather I was saving for Jaime (where it wouldn’t have been enough) and made belt pouches. The best bit? The belts themselves are just lengths of black cotton rope…because Lily’s a chewer, and we’d already bought a 100′ coil of it to avoid the $10 charge every time she wears one out.

If I get ambitious between now and April, I might try to make us caps…