Hello friends. I am here to report that I have successfully navigated my first – and hopefully only – plumbing experience.

I changed a faucet.

For some reason the lovely people who rehabbed our house before we moved decided they would put a faucet with two knobs in the kitchen. Well, I finally decided enough was enough and I would like to be able to turn the water on with my wrist when my hands were covered in goop, thank you very much.

So a couple of months ago…er, maybe more…Jeff and I picked out a new faucet. And last weekend I went to basic plumbing class. I learned interesting things about U-traps, the changes in plumbing technology over the last few decades (for real!), and how easy it is to change out the components of a faucet so you don’t have to replace the whole installation if you don’t need to. Too bad going from two handles to one wasn’t one of them.

Of course I made sure at the end of class I knew the right steps to follow. Like, you know, turning off the water to the sink before doing anything else. Which turned out to be impossible. Luckily, Jeff stepped in for that bit.

Then I started trying to take the wing nuts off. The one under the spray nozzle had so much gunk stuck to it. And the gunk fell on my face. Ew! Getting them started was an incredible challenge. I had to hit them with a hammer, bit by little bit, until they loosened enough to turn. Even then, Jeff had to hold the top part steady so they didn’t just rotate around themselves.

Getting the water supply tubes off the faucet leads was similarly challenging. It made me wish I’d followed the teacher’s suggestion of getting a sink wrench. But since I hope never to need one again, I’m just as glad I didn’t spend the money. Especially since it went into new water supply tubes. Turns out the ones that were in there were specially cut to fit the exact dimensions of the old faucet. With a pair of new lines in the center, instead of offset to the left and right, they no longer lined up straight. In short, dear readers, they leaked.

I would like to add a digression, however, that in order to put the old water supply tubes on the new faucet, I came up with a lovely hack the likes of which the internet adores. The nut meant to seal the tube to the faucet intake insisted on sliding all the way down the tube. So I grabbed a hair clip and put it around the tube (note that the opening is large enough not to pinch it!).

After a trip to the hardware store for new supply lines, they went on as smoothly as anything. And no leaks!

Well, despite my best intentions of making Jeff’s regency coat first, I was compelled to make my own spencer. It went much the same as the dress bodice, since I’d cut out a larger (particularly a higher neckline) version of that same pattern. Having learned about the intended gather under the bust, I instead removed quite a bit of width from the back edge of the front piece. Between that trim and the wider cut of the shoulders, the shoulder seam came out a bit farther than it should. I think that’s also part of why there’s some pull at the center of the bust (though the bottom edge still needed a dart). 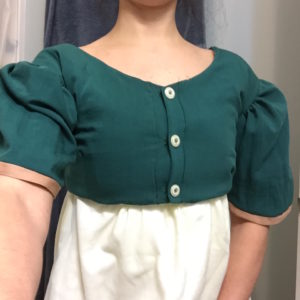 I thought I might be able to fix it by throwing in a new seam, but I think it’s going to take entirely re-setting the sleeves at this point. Which I thought I was too lazy to do, but looking at this picture enough might change my mind… As far as the sleeves go, they got left ungathered (though with a fold in back since neither one went on straight).