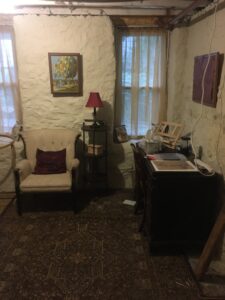 I’m rearranging the steampunk sewing area, and adding a costume closet down there to free up space in the bedrooms they’ve previously been migrating between. There’s still a little extraneous stuff to find homes for (and I’m about to dump my fabric stash back in it for a while) but I think it’s coming along nicely. I won’t show you the double stacked clock and mirror though. Or especially all the chicken stuff. *sigh* 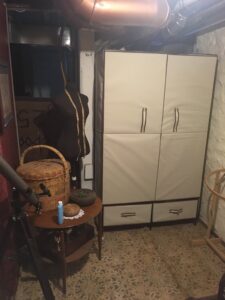 Since I’m writing anyway, I wanted to do a quick round up of the newer costumes (or just ones I haven’t shared photos of previously). As you can see, I already stuffed the dress form in a corner, so any shots I took specifically for the post are…a little limp.

Please note these are in no particular order. Well, I supposed by how they came out of the previous closet. 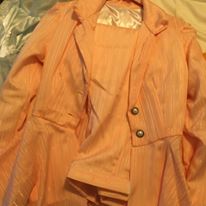 Princess Business – Pink pinstripe suit constructed in fall 2018. The pants ended up just slightly too small by the time I wore them to the symphony’s live Nightmare Before Christmas at Halloween. Lo and behold I was pregnant… My body is definitely a different shape now (no one mentions building out your shoulders and arms!) so I gave it away, but the highlights of the design were definitely the flowing peplum and lovely pearl buttons. The lining had a really nice feel to it, too. 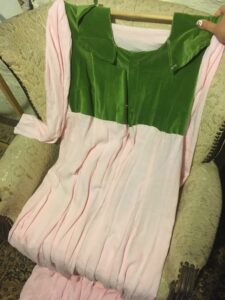 Pelisse – Regency coat I made for myself in early 2019. Luckily I cut the pieces out a bit bigger the previous fall. I was so pleased that I was filling out the yellow dress I wore under it better but it turned out to be a very good thing I made the pelisse. I had to keep it on over the dress for the whole event when I popped a hook and eye! Even the very sedate dancing style (primarily walking) was fairly tiring at that stage too. 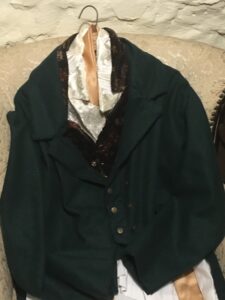 Regency waistcoats and tailcoat – Did you know that gentlemen often layered two waistcoats in the 1810s? Neither did I! But I found out when I finally broke down and ordered fancy patterns from a small seller online to make updated pieces for Jeff. For some reason they’re just not popular enough that big pattern companies sell them? Anyway, it meant I got to use two of my fanciest fabrics (augmented with broadcloth for the back). Very fun. We were running out of time for the same early 2019 event and intended to rent – but the local costume shop was out of stock due to a high school production of Les Mis. At least they had pants, so those are still on my to-do list. But I did bite the bullet and buy wool to make the tailcoat. Of course, the folks at the costume shop mentioned they let it drape for a couple months at some point early in the construction process, and that clearly wasn’t going to happen since I had about a week. Including my promised birthday gift to my sister of going to the symphony’s live Pirates of the Caribbean (you may be sensing a theme). After unsuccessful ticket trading shenanigans, I decided sleep was for the dead and did both. There’s still some fine tuning to do at the waist as well as adding the lining (I think?) but the wool was beautiful to work with and the coat looks much better than my previous attempts. 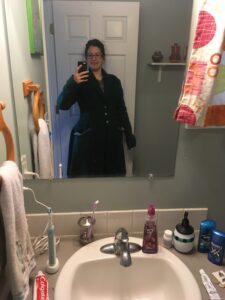 1950s (surprise maternity) coat – So before I got so excited about wool, I actually decided to try making myself a 1950s coat from some of our extra fleece blankets. This was another fall 2018 cut, spring 2019 construct. The wind tends to blow right through it, unfortunately, but there are enough panels that with my paranoid extra seam allowance there was actually plenty of girth for pregnant belly. Which is good, because by the tail end of spring it was the only thing that fit. I cheated on the buttons – they’re just for show and it actually closes with snaps. So it’ll be easy to give it a little adjustment for the fall. 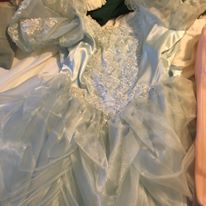 Cinderella – I didn’t make this. I got it from a theatre group that got it from a dress shop that I can only assume was meant to be for a Quinceañera or something. I just barely squeezed into it for a Halloween party in 2018 (again, turns out I was pregnant). I’m so glad I had a chance to wear it before it moves to its next home. 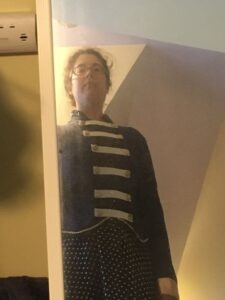 Jaeger – Have you read Girl Genius? No? Check it out. Anyway, the jaegers are great. Their dialogue is written in dialect, they’re obsessed with hats, and they make for a great costume. I never figured out the makeup so never wore it fully assembled. I…when did I make this? I don’t know! Anyway, because the military jacket fastens with elastic straps that part still fits. I tried it on for a (literally) hot second in honor of watching Hamilton on Disney+. 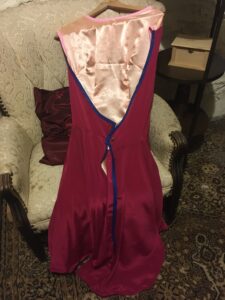 Walkaway Dress – I don’t remember when I made this either, but it’s a project I’d been wanting to do for a while. I bought the pattern after finding a tutorial for it online. It’s just a gorgeous look, and I was looking forward to playing with contrasting colors of fabric and bias tape from my stash. Fairly quick and easy, though I prefer to wear it over another light colored dress. I really liked the button I picked…not that it shows. 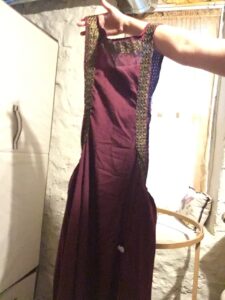 Sideless Surcote – Fall 2018 again. I wanted something medieval, to use up the red from my stash, and finally put this awesome trim on something. So in my mass cut out of patterns, I cut this one too. I may even have finished it that fall, too, because it was about the easiest of the things I was prepping. Now I need a new kirtle to go underneath. Probably going to have to buy fabric for that though. 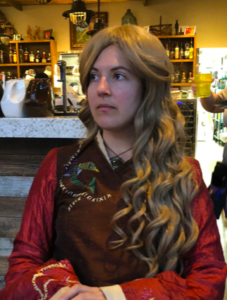 Cersei, complete (and Jaime too) – So I never actually wrapped up the story of Cersei and Jaime. Er…too soon? I ended up fairly pleased with the bodice and sleeve embroidery. The lions were, shall we say, an approximation. Jaime was interesting. I really just made the coat. Out of…vinyl? Pleather? It fed through the machine quite nicely, actually. The real trick here was buying lots of accessories, honestly. So once they were ready… 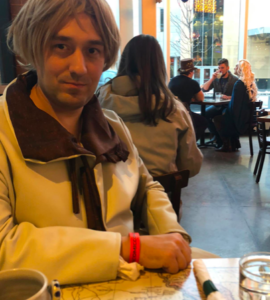 We took them out to the local Comic Con. Wandered the vendor area and the halls. Saw three versions of Daenerys. Attended a music panel. Followed a Daenerys into a restaurant across the street and made a silly post about it. Showed it to her before we left. She was amused.

And I think that’s that.