Basically the minute I knew that the very first ren fair Jeff and I were going to was going to be having “Wonders of the World” weekend (Steampunk, Doctor Who), I realized that I needed some kind of character hook for our steampunk-y outfits. And what better than to do a steampunk Sherlock Holmes? (I’ll cover the accessories I made to augment my previously built 1890s/1900s outfit into a steampunk Irene Adler in the next post – which now exists: click here!)

At about the same time, I found myself helping build four identical wedding dresses for the final scene of Much Ado About Nothing. The experience was intensely motivating since I hadn’t done a sewing project in a while, and it reminded me of my skills and stamina. I also garnered some rather useful thoughts about fitting clothes on other people – which was much appreciated because I’d really only sewn for myself, one other skirt aside! I also took the opportunity to commandeer the theatre’s fabric cutting table on a couple of occasions, which helped me bypass the perpetual “help” offered by the cat when I work on the floor at home.

I started with a very comprehensive list for each part of the outfit and its accessories. I’ll talk about the materials and construction (if applicable) for each of them in their own section below. But first, a shout out to my sister for coming fabric (er, mostly button) shopping with me – I hope you’re enjoying your adult coloring book reward! 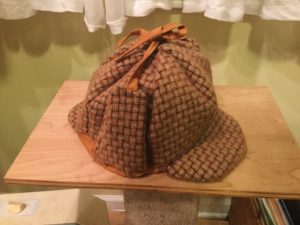 – Deerstalker Cap: thick brown/orange/beige plaid wool which I purchased specifically for the outer layer, yellow/orange liner from my stash for the inner layer and the ribbons, brown thread from my stash, and a couple of bits of cardboard from a granola bar box. I have to say I was really proud of this piece – I am a habitual pattern user, and I made it without a pattern! I looked at some reference photos, and determined that I needed to cut ten identical rectangles of the fancy fabric, then round them off on the short side for the six sections of the actual hat and the two double sided ear flaps, plus two more longer, thinner ones rounded on the long side for the front and back brims. (And liner for everything except the double sided ear flaps, of course!) I measured the circumference of Jeff’s head, did some division, added seams allowances, and voila! I actually made this piece close to last, so I was getting used to working from the inside out, turning the liner to the inside, and then hand finishing. The only catch with this one was that the liner didn’t sew in evenly, so I had to piece in an extra section to match the circumference of the outer layer. Overall, a successful piece! It really helped the whole outfit be readily recognizable as a specific character. 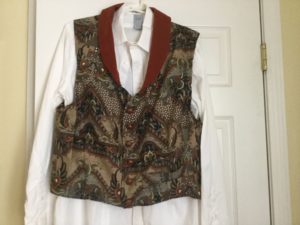 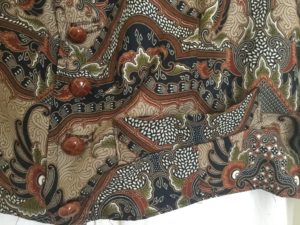 – Vest: wild steampunk-y print from my stash for the main body of the vest, orange velvet from my stash for the collar, six amazing “knit” buttons my sister picked out at Field’s Fabric, Simplicity Pattern 2895 from my stash, and brown thread from my stash. This was my first try at independently fitting a garment to someone else, and it worked moderately well. I cheated and didn’t include a liner, since we’re expecting to have to take it in a bit in the future, which made the piece a bit floppier than preferred. I’m also not entirely comfortable with the buttonhole foot on my sewing machine, so I put it on buttonhole settings but controlled the spacing myself, with mixed results. But! I made my first pocket, and it’s perfect for holding prop #1:

– Pocket watch: a little gold number we already own. We found out to our surprise at the ren fair that it actually works!

– Cravat: more of the yellow/orange liner I used for the cap, again using Simplicity Pattern 2895. I took some shortcuts on the folds since it was more of a last minute addition, but it eventually became home to accessory #1:

– Stick pin: we didn’t find this until we visited an antique shop after the ren fair, but we now have a gold stick pin with a color-coordinated orange stone. Under it all, of course, there’s a foundational garment:

– White dress shirt: a quick thrift store find. The collar isn’t quite right with the rest of what’s going on, so we’ll be upgrading eventually to a frill-less version of Simplicity 4095 (since it’s already in my stash). Most of the bottom of the costume is similarly basic:

– Brown pants: a more effortful thrift store find. Why are clothes that are ostensibly the same size always widely variable in their fit?!

– Brown shoes: Jeff’s every day pair of slip ons (no laces, no nothing – nice and smooth) which we expected to be a perfect base for:

– Spats: some really neat black flower outlines on brown pleather I found at Field’s, plus brown thread from my stash and McCall’s 6975 from my stash. I was really excited to find some random stick-on velcro dots in my stash to secure them. Sadly they didn’t sit quite right and we had to leave this piece out! However, moving back up to the waist, I also made:

– Cargo belt: more of the pleather from Field’s, brown thread from the stash, a pair of steampunk cuff links we already owned, and McCall’s 6975 from the stash. I reduced the width of the top layer, and I think I had to add more pleather backing on the straps than the pattern actually called for. I also had to run out and buy four D rings since I hadn’t realized I’d need them. One of the pockets took two tries to sew it into the right shape. I stuffed the pockets with tissues and sealed them shut with the cufflinks – not a functional prop holder, there. We also didn’t end up using props #2 and #3:

– Pipe: we bought a cheap costume pipe from a local costume shop. The bowl was white (maybe they thought it looked like ivory?) so I painted it to look like wood (thanks, theatrical set painting practice) with the green, orange, and white left in my acrylic paint set (thanks, painting party at Bamboo studio). We need to make it possible to hang it from the belt.

– Magnifying glass: we’ve had this magnifying glass around for a while, and I got out my gold enamel paint to change the silver rim to gold. This beauty’ll need to hang from the belt for future uses, too. And the last item we didn’t use was: 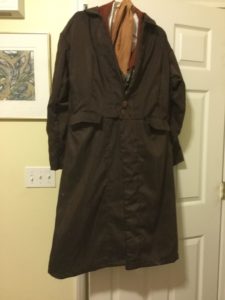 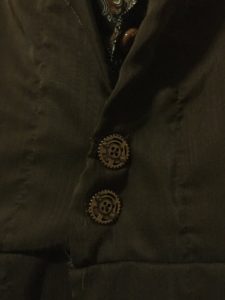 – Great coat: thrifted brown curtain(!) that I was honestly hoping to use later for Littlefinger, more brown thread from the stash, and a couple of amazing bronze gear buttons my sister found at Field’s. Plus of course once again Simplicity 2895. I thought I had a great cheat since the curtain was lined, but I cut and sewed the coat and liner simultaneously leaving the seams on the inside, and this white stuff frayed like crazy. I turned in as many of the seams as possible, but I’m probably going to have to re-line it with more of the yellow/orange from the stash, if there’s enough. I had the same issue with the pockets as on the vest. I skipped the second set of pockets on the top half – I love that the main pockets are right on the line between the … can I call it a bodice? … and the “skirt”. (Tails?) Anyway. I made sure to do fittings with all the other layers underneath, so we didn’t end up making it too snug. It looks pretty good on, but hides all the rest of the fun colors, so we’re probably also going to have to find a way to tie it back or leave it open in cooler weather. Maybe move the buttons to the cuffs…

I ended up making very bad shoe choices myself (again, more on that later), so we didn’t wander much at all that first day. Which meant we were right in the appropriate place for the end of the day’s costume contest. Which we won. As a couple. Which they weren’t planning on (but then so did the awesome Victorian Harley and Joker pair). And really we won because “Sherlock” bantered with the judge (as did Harley, for that matter). But who’s counting?

Hi there. I’m Elianna. I like textiles. And science fiction. And fantasy. And therefore, inevitably, cosplay. Historically-accurate garments, too, actually, but I need some more practice before I really go down that rabbithole. (Plus lots of other things, but those will be listed under a different set of tags.)

I was lucky enough to be gifted quite a lot of fabric by a friend of my mom’s. Some of it’s earmarked for particular projects (like the someday costumed trip that Jeff and I will take to Colonial Williamsburg). Some of it isn’t. You’ll see me make some adjustments and trade-offs to make the free fabric work. Because costuming can be an expensive hobby, and I’d like to avoid incurring a lot of cost before I really know what I’m doing.

I learned to use a sewing machine pretty young, if by “use” you mean “put in a straight stitch”. I think I was 7 or 8. My mom and I made a lap quilt together using t-shirts and bias tape. I really got going in high school. I started using patterns to make a skirt and vest (then added sleeves) and improvised a (non-matching) cloak.

I took a costume design class in my college’s theatre department, where they taught me new techniques like how to drape (something I should really try again) and how to use a buttonhole foot (which I’ve clearly forgotten). My mom and I went in on a new sewing machine together. She made my sister a t-shirt quilt, and now the machine is mostly mine. I bought an old dress form cheaply from a friend. Built a chemise, a 1950s style yellow polka dot dress (with two identical [not mirrored] shoulder straps), and a bridesmaid’s dress and matching tie. (Also curtains. So many curtains. Plus a baby quilt for Jeff’s cousin’s kiddo.)

And all of that more or less brings us to the present day and the projects I’ll be covering here!