Remember how I mentioned fleeing to the country? Granted it was planned ahead of time, since we signed up for a few day trips to see some key places outside of Paris, but this first stop was it:

Definitely modern art, at least. Click to embiggen the birds. We had lunch on the way up with the bus. Sat with a family from…somewhere else. Drank some scumble. No that’s the Pratchett name. Norman apple liquor. Calvados. We bought a tiny bottle to share with Jeff’s mom.

Exiting through the gift shop (and walking back to the bus) entailed walking past some painted cow statues reminiscent of a campaign I saw in Chicago growing up. I’ve always like world maps, so of course I’m featuring this one.

And now for documentary evidence of the aforementioned fireworks. I think that’s really all there is else to say.

Our next day trip was an outing to three Loire Valley castles. Amboise first, where da Vinci stayed before his death. The park there includes several of his machines. Fascinating! And an adorable turtle sculpture in a fountain as we returned to the bus.

Of course, we were able to get sorbet, too, which was lovely. Especially when served two flavored in the shape of a flower!

Stop two, Chenonceau. The estate includes two beautiful gardens. The arches over the river were right on the line between Vichy France and occupied territory. It allowed for movement by both refugees and the French resistance!

Finally, Chambord. Architecturally ridiculous, but home of the famous eponymous raspberry liqueur, which is delicious. The modern art displayed inside was interesting, too. All in all a good day.

Last summer, Jeff and I took a trip to Europe. Three weeks, three countries…though really we only spent a couple of nights each in two of them. We both studied French and therefore chose to keep most of the trip in France, including nearly half based out of Paris. Since I’m writing this just after returning from our second major trip of the year, I thought it would be a good idea to finish paring down the old photos for the blog before we start on the new set. We (mostly Jeff) took about 4000 pictures in Europe. Thank goodness for digital cameras! We got it down to roughly 250 for general family and friends viewing. And it looks like I will be able to tell our story here using about 50 of those.

So let’s take a metaphorical journey back to July, where we started off with a very long journey: an attempted four hour train ride to Chicago – blocked by downed trees – replaced with a shared Uber ride, followed by a couple hours of down time and a seven or eight hour flight. We arrived in the Netherlands shortly after the crack of dawn, and were delighted to find that the Amsterdam airport had a beautiful shortcut for buying a train ticket into town. Unfortunately, we were so exhausted that we forgot upon arrival at the train station that we meant to take additional public transit to our hotel, so dragged ourselves and our luggage on a meandering yet beautiful walking trip through the central city. 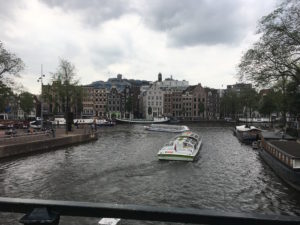 I love the northern European port architectural style of tall, narrow buildings. Some of them still have hooks at the top for using ropes (and pulleys?) to bring loads of supplies upstairs. Amsterdam’s canal layout makes it easier to tell where you are, too. While I liked the city’s bike lanes in principle, I found that my instinctual way of crossing streets wasn’t compatible with the new traffic pattern. It would have taken maybe a week or two to adjust my movement habits, but we only had two days in town. We found an outdoor market and a hole-in-the-wall cafe with delicious food on our way to the hotel, then I succumbed to a nap while Jeff went out hunting for a European sim card. He ultimately got one, but was never successful in getting it to work. 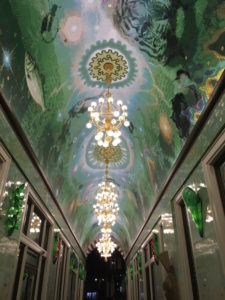 We spent the majority of our time in town wandering and eating, not entering any of the major attractions. We stumbled into a free organ concert in a local cathedral (Saint-Saëns’ Carnival of the Animals may never be the same again). We perused two separate outdoor markets – one food, one art. We tried a cone of Belgian fries and ate waffles with ice cream. Come evening, we sought out a restaurant whose discount card was stocked at our hotel for rijsttafel – essentially Indonesian tapas, which I finally picked up enough Dutch to translate as “rice table”. We strolled past many of the notable landmarks (even hearing some street musicians in the amazing acoustics central tunnel of the Rijksmuseum), and breezed past the many outdoor shops (finding the fish mosaic pictured above). 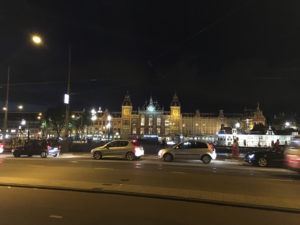 We learned that the train station (left) was built as the East India Trading Company’s headquarters. The next day, we walked around part of the exterior of the zoo, had more food and art adventures, discovered that tulip bulbs souvenirs destined for the US have to be specially certified and can only be purchased at the flower market or the airport. We got a bit lost past the red light district trying to find local art galleries. 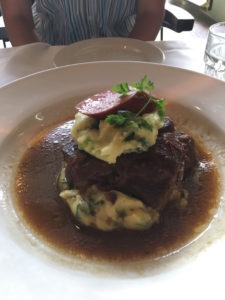 We don’t normally do food pictures, but our last dinner in town was translated as “beef stew” and served with a wedge of the local sausage on top.  Although it was delicious, we felt there was something off about the label. See if you agree – it’s pictured on the left. We also don’t tend to drink very much, but there again we felt it was worth doing something special in each European country, so we tried some stroopwafel liqueur  – it was nicely smooth and sweet.

This is rather a paltry introduction, but good food is one of those things that Jeff and I are pretty enthusiastic about. We like to cook, though often it gets pretty routine. Sometimes we are able to come up with really delicious new combinations, so I might as well share those here, too.

I’d gotten home late from the theatre one night this weekend, and suckered him into making crepes. (I make a mean pancake, but I can’t flip crepes to save my life.) Usually we eat them with a syrupy cooked fruit mixture and whipped cream, but this time we discovered that our frozen fruit was VERY frozen. Lots of extra ice all around the strawberries especially, but even the blackberries were pretty coated. Which meant there was much more liquid left when we were done than usual.

Now, if you’ve had the packaged instant oatmeals, you know they come in all kinds of flavors. And I thought to myself, here is a way of making a more authentic “strawberries and cream” oatmeal. So I stuck the pan of liquid in the fridge to save for the next morning.

Well, I got it back out and cooked the oatmeal directly in extra strawberry water, then scooped some leftover whipped cream on top and mixed it in. Let me tell you, the fruit flavor was intense! The whipped cream made it almost too rich, too – I was hungry enough that I wanted a second bowl, but had to make Jeff help me finish it.

I think “peaches and cream” should be doable, too – you can probably even start with a can of diced peaches, set half to two thirds of the actual fruit aside and use the rest of the fruit and its liquid as above (possibly with some watering down).