Alright, let’s see how this goes. Back in 2019 when we a) didn’t have a kid and b) could still travel because COVID wasn’t ravaging the States, we snapped up a package to visit three new Eastern European cities: Budapest, Vienna, and Prague. It started, as many such tours do, with a stop in Paris, and we delayed our flight home at the end to pick up a round trip from Prague to Geneva, Switzerland to spend some time with extended family living there. Let’s start like the trip did, in Paris: 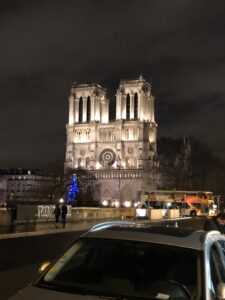 Having learned from the “death march of art” during our first visit to Paris, we decided to try a more sedate strategy. I’d set a handful of “breadcrumbs” (map markers) within an arrondissement on Jeff’s downloaded map of the city each day and we’d wander our way from one to the next. Of course Jeff got a nice photo of Notre Dame all lit up, too (this was not too long before the big fire there).

There was a fun exhibit at the complex housing the Natural History Museum, Zoo, etc. with several very large colorful animals (I think they were inflatables) that lit up at night as well. There were more in the zoo, apparently, and the ticketing/line after dark was huge! 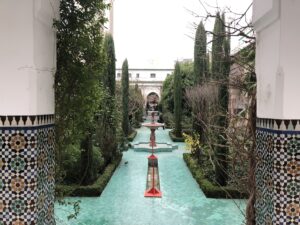 We took the opportunity to visit the Grande Mosque. The prayer hall was closed off to visitors, but we could hear some of the chanting. The mosaics within the courtyard were particularly lovely. 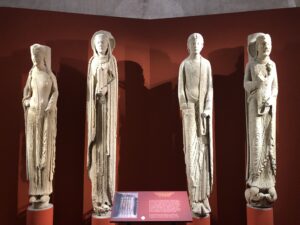 We also stopped by a “new to Jeff” museum – the Musee du Moyen Age, which is most notably the home of the Lady and the Unicorn tapestries. We enjoyed seeing a temporary exhibit on the gothic sculpture that adorns cathedrals as well. 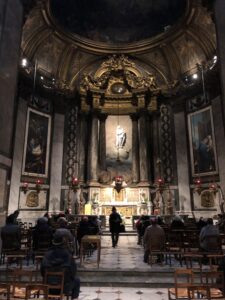 We wandered into some churches to see the interior architecture and decorations as well. This one was particularly striking.

Of course we made sure to visit our favorite Eritrean restaurant again and I got to try some matcha flavored madeleines from the fusion patisserie Sadaharu Aoki.

Sadly we missed the Atelier de Lumieres as they were transitioning between exhibits. 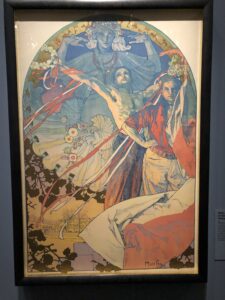 We were also lucky enough to find a Mucha exhibit at the Jardin du Luxembourg near our hotel. We got to see many of his most famous works as well as some lesser known costume designs(!) and learned about his series of Czech nationalist paintings, one of which you can see here.